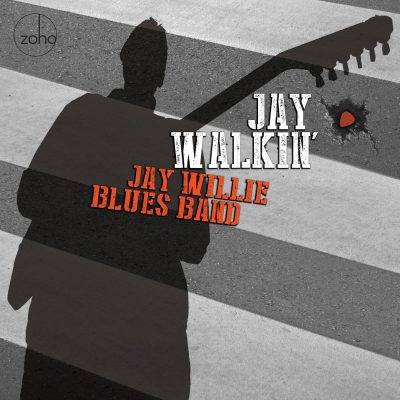 The Jay Willie Blues Band was formed in 2001 by guitarists Jay Willie and Bob Callahan; and former Johnny Winter drummer Bobby T Torello. Although based out of Newton, Connecticut they are a Texas Blues band with one foot in the traditional and the other in a more contemporary style.

The Jay Willie Blues Band released their debut album “The Real Deal” in 2011 with former Stevie Ray Vaughan bassist Tommy Shannon. Critics were impressed with Jay Willie’s slide guitar tone and technique. In 2013 they signed with Jochan Becker’s ZOHO music label. This is the fifth consecutive album for ZOHO the last being 2016’s “Hell On Wheels”. The bands newest member is Paul Opalach, who has worked with both Debbie Davies and Paul Gabriel, and he plays bass, guitars, and keyboards. Once again special guests include Malorie Leogrande and Jason Ricci.

There are seven fabulous covers and five originals. Roger Miller wrote “Wish I Hadn’t Called Home” before he became a country music superstar. It was a 1961 hit single for Dale Hawkins and the JWBB’s version still has that swampy edge. Ricci adds his Blues Music Award winning harmonica to the production. Ricci plays again on “44 Blues”, first recorded by Roosevelt Sykes in 1929, and the song is driven by Torello’s big time beats.

“Hittin On Nothing” is credited to Naomi Neville a pseudonym for Allen Toussaint. It was a 1963 single recorded by Irma Thomas. It is sung by Leogrande, a soulful vocalist, with some fabulous guitar from Jay Willie. Leogrande sings again on an original “The Other Side” co-written by her, Opalach and Jay Willie; on it Opalach switches to a lap steel.

Additional covers include J.B. Lenoir’s “I Feel So Good” from 1963; Lowell Fulson’s “Sinner’s Prayer” recorded by Ray Charles in 1957; Leonard Feather’s “How Blue Can You Get”, first recorded by Johnny Moore’s Three Blazers in 1949; and Blind Willie Johnson’s masterpiece “Soul of A Man” which dates back to 1930.

Jay Willie has written “Step A Side” and co-written, the title track, “Jay Walkin’” with Opalach.  Callahan contributes “Move Over” and we get to hear his beautiful high tenor voice. “Go To Guy” written by Torello is a high energy rocker featuring Jay Willie on slide.

The Jay Willie Blues Band proves they still are the real deal.

Consider these other great articles on Making a Scene