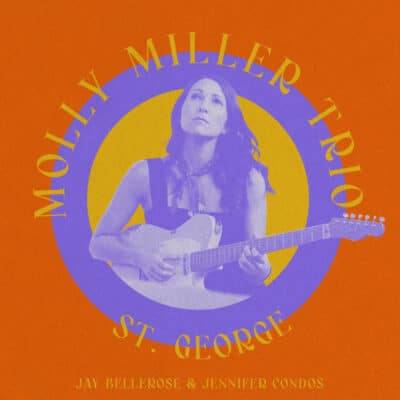 The Molly Miller Trio features three well-known first-call musicians. Molly Miller, the chair of the Guitar Department at Los Angeles School of music and has a regular gig with Jason Mraz, having also played with the Black Eyed Peas, Donna Missal and Morgxn. Bassist Jennifer Condos has a decorated resume that includes Stevie Nicks and Jackson Browne. And drummer Jay Bellerose has long been in company of T-Bone Burnett, Allison Krause, Robert Plant and several others. You’ll notice that there were not recognizable jazz names in that litany, but this album will probably be filed “under jazz.” It does teem with improvisation but also has the structure of arrangements and songwriting. The 11 tracks were laid down in just two days, which itself speaks to a certain level of spontaneity.

Miller has a highly melodic approach, and many of these songs unfold as if you were hearing a singer-songwriter with the guitar taking the lead voice. Yet, it’s not just the melody that will impress. Miller’s style is like vocal phrasing and her use of dynamics is especially impactful going from hushed whispers to sharp poignant bursts within the context of the same piece as in the second track, “Hasta Luego.” Perhaps these techniques also reflect the concept of the alum which is about movement – moving homes, moving on tour, moving from one place in your life to another. As such, the moods and tempos are constantly changing, moving from a dynamic track like the former into the reflective, melodic title track which keeps building in intensity before easing back down again, as just one clear early example.

Miller seems to has a confident sense of direction with Condos and Bellerose more often responding to her leads posed as jabs, questions, or declarative statements, than pushing her. Yet, some of the conversations will then take the tune to a different place, connoting an adventurous journey such as in  one of the more rollicking turns, “Hear It Calling,” a standout track. That piece notwithstanding, her use of chords and sensitive melodic touch (“Meditations on Movements,” “Slow Burn to Nowhere”) will at times remind of Bill Frisell sans effects.

Her guitar tone is mostly gorgeous and expressive but versatile enough to take on a louder, cutting rock style when called for. Like movement, the appeal of several pieces is their unpredictability, “Over the Fence” has the qualities of a ballad and frenetic passages akin to free jazz mixed with a steady groove all within the piece. “Whenever You Call,” staged as a rather reflective piece in the first half of the album is reprised as the closer, in a frenzied, hurried frantic take.  Such is the nature of moving.

St. George is a highly evocative, surprisingly transportive listen. Guitar playing is rarely this expressive and the trio interactions are tight, revealing the right balance between focus and individual freedom.