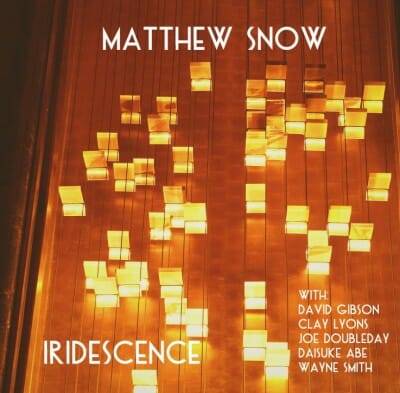 Matthew Snow’s Iridescence stands apart from most straight-ahead jazz albums due to that unusual instrumentation. Delivering hard bop and ballads without tenor sax, trumpet or piano is rather heady stuff but Snow’s combination proves intriguing.  Joining Snow who is an emerging composer and bassist based in NYC is joined by fluent trombonist David Gibson, altoist Clay Lyons (with a sound resembling Cannonball),  stirring vibraphonist Joe Doubleday, precise guitarist Daisuke Abe, and the subtle, tasteful drummer Wayne Smith.  This is the debut for Snow and this inventive jazz sextet with eight compositions, all Snow originals.

It’s sound that takes a few listens to acclimate to. Often the trombone solos where you’d expect to hear a tenor or trumpet.  Vibraphone and guitar solos fill what is customarily the piano spot and Snow, who gives plenty of freedom to each band member, solos only once on “Buoyantly Bliss.” The blends of  trombone and alto as well as guitar and vibraphone are richly harmonic and work surprisingly well in this setting. Snow’s  major strength is as a composer and his melodies, chord structures, harmonies and ensemble lines show real strength; don’t be surprised to see these or some of his forthcoming compositions become jazz standards in the future. Snow has been working in the New York scene for seven years and certainly seems to have put his best foot forward here.

The up-tempo pieces “Amber Glow,” Blitz”, and “The Change Agent” are filled with vigorous soloing. “Jealousy,” which concludes with a surprising high-note trombone cadenza is a bit on the funky side. “Brood” is a dirge-like ballad which proves to be a showcase, (as Is “Venus,” another in the introspective vein) for Gibson who displays remarkable tone throughout.  Doubleday’s vibes solo also adds to the mysterious mood of the piece. “The Exit Strategy” and “Buoyantly Bliss” prove that the unit can swing hard too.

This is an auspicious debut, putting a new twist on traditional jazz.  As the definition of “Iridesence-  a lustrous rainbowlike play of color caused by differential refraction of light waves,”  it’s an apt title for the colorful blending and refraction of sound waves from this sextet. Stay tuned. Snow has all the makings to be a major force.