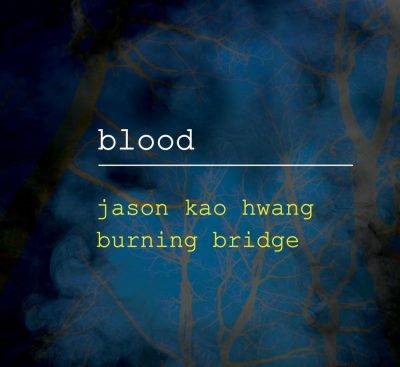 Forgive this start as Blood is an ultra-serious project but this writer cannot help but recall a night of listening to several forms of live jazz in Beijing, China a few years ago.  After listening to a couple of straight-ahead bands and a Salsa combo, our last band of the evening struggled to combine eastern and western approaches at our hotel. My companion turned to me mid-set and said, “You know what we call this – East meets West – all fucked up.”

With that memorable phrase in my head, it’s more than fair to say that Hwang and his Burning Bridge ensemble completely defy that damning description. They’ve found a way to make “East meets West” work. This is a fascinating, rather chilling, but ultimately inspiring set of music, unlike anything most of us have heard. Not only are the compositions challenging and far reaching but the Burning Bridge ensemble consists of a unique set of instruments. Hwang (violin), Taylor Ho Bynum (trumpet/fluegelhorn), Joseph Daley (tuba), Andrew Drury (drum set), Ken Filiano (string bass), Steve Swell (trombone),  Sun Li (pipa – a four stringed Chinese instrument) and Wang Guowei (erhu  – two stringed bowed instrument, aka spike fiddle) comprise the band.

Burning Bridge was founded in 2009 with support from Chamber Music America’s New Jazz Works funded through the generosity of the Doris Duke Charitable Foundation. The five movements that comprise Blood Premiered at Edgefest 20 (Ann Arbor, MI) on October 28, 2016 and later at Vision Festival 22 (NYC) on May 31, 2017. The album was recorded on March 11-12, 2018 in Union City, NJ.

Scott Curie does a detailed job of describing the project in the liners which we’ll get to a bit later. To set the stage for why this is about violence we first excerpt from the composer Hwang’s statements. “While driving down on an unlit road, my headlights flashed upon the bleeding carcass of a deer. My heart exploded as I swerved away, narrowly avoiding a collision. This overwhelming shock made me reflect upon my mother’s harrowing experiences in China during World War II. She was in a pharmacy struck by a Japanese bomb. Knocked unconscious, she awoke as the lone survivor surrounded by the dead. I also thought about Butch Morris and Billy band, musicians I’ve worked with that fought in Viet Nam. The magnitude of pain and sorrow that they endured is unimaginable.” In his next paragraph he says, “…Through Blood the violence of deeply held memories are not relived but transposed into our sound. Blood in our sound rises within our voice to defy humanity’s constant state of war. Blood  liberates our song. Blood regenerate s into wholeness and strength.”

In the liners Currie details the five acts, 48 minutes in totality. The first act begins and ends with reverberations of distant bass explosions with ensemble and duo or trio pieces engaged in intense dialogue in the bulk of the movement. The second act begins with a mournful ceremonial procession that morphs into a bluesy strut, concluding in a climatic syncopated ensemble passage. The third act returns to the ritualized austerity of the first, featuring pipa-percussion and trombone-erhu-bass dialogues. The fourth movement brings back the beat with violin-led call and response exchanges. The final act reprises the explosions and flying debris heard in the first with bass and tuba featured. The ensemble concludes with an emotional plea for peace.  Again, this summation hardly does justice to Currie’s notes which are far more specific.

In Blood Hwang and his Burning Bridge ensemble marry traditional Chinese instruments with conventional western ones for intense, at times disturbing dialogues and exchanges of experimental jazz all aimed at confronting and counteracting violence. Admittedly, this will be dauntingly challenging listen for many, but the imagery one can evoke while listening certainly finds one admiring the compositions and certainly the execution.