Ches Smith’s We All Break Path of Seven Colors 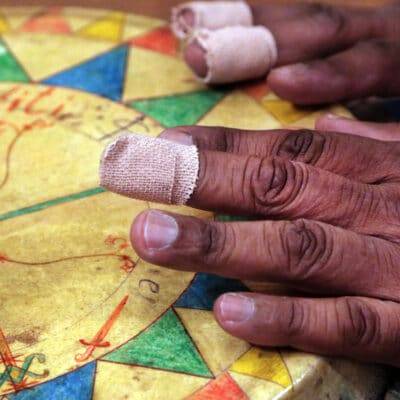 Ches Smith’s We All Break

The music on Path of Seven Colors is likely unlike most anything we have heard. After all, how many of us are familiar with traditional Haitian Vodou music? The octet We All Break, led by forward-thinking drummer Ches Smith, take this foundation, and mix it with jazz forms and plenty of improvisation to create an album that in name, states seven colors, but in fact produces multiple hues. Along with Smith on this ambitious journey are the members of We All Break – pianist Matt Mitchell, alto saxophonist Miguel Zenon, bassist Nick Dunston, vocalist Sirene Dantor Rene, and three more drummers – Daniel Brevil, Markus Schwartz, and Fanfan Jean-Guy Rene.

The curious will be rewarded with quite a package that includes two extensive booklets with track-by-track narratives, photos, and lyrics in Creole and English. It also includes a bonus disc of the self-titled We All Break original quartet (three drummers- Brevil, Schwartz, and Mitchell as pianist with occasional vocals).  There is also a 50-minute film available on the release date of June 11 “We All Break” available at the websites of the label, Smith, and the award-winning filmmaker Mimi Chakarova.

This is the only music of its kind and represents an expansion of the original quartet rendering as Smith is quick to point out that there are no blueprints for taking traditional Haitian songs and marrying them with contemporary improvisation.  In that sense it is continually experimental seeking to find the right balance. Smith has been at it for 20 years when he first got called to support a Haitian dance class. That balance in Smith’s view called for – lead/chorus song structure, polytonal relations among singers and drums, conversations between the drums, and breaks at the center of each piece. The traditional rhythm would be the foundation for each composition, but the pieces could take a life of their own through improvisation.

The opening “Woule Pou Mwen” is rich in the vocal and chorus component while “Here’s the Light” features that, a sterling lead vocal, and the usual imaginative, fiery playing of Zenon, all to the polyrhythmic backing of multiple drummers. “Leaves Arrive” begins with a lead vocal and choruses, sounding very much traditional and tribal before it breaks into a freestyle interchange between Mitchell and Zenon, drum breaks, and an exciting, spiritually fueled instrumental sequence.

Smith had worked with Mitchell before and feels that his melodic, harmonic, and sense of both rhythm and improvisation make him a natural for the project. Brevil and Schwartz are his mentors so he knew he could rely on their insights. Jean-Guy Fanfan Rene is co-leader with Sirene Dantor Rene of the Vodou-activist group Fanmi Asoto. Dunston’s throbbing bass was added to essentially serve as a fifth drummer. Zenon was added almost as an after-thought but because Smith had played a gig with him, he knew that Zenon’s playing would only help to push the music forward. The most outstanding example of this is “Women of Iron,” a tour-de-force for the saxophonist.  Sirene Dantor Rene adds the final element – a female voice of strong conviction.

The major composer is Daniel Brevil, who found traditional Vodou songs, melodies and lyrics that joined with Smith’s instrumental compositions. The band rehearsed and recorded for a week in February of 2020 for this trailblazing adventure. “Lord of Healing” extends for 13 and a half minutes, beginning with lots of choruses, piano, and minimal drums before blossoming into a heavily percussive piano passage, spiked with a few brief Zenon statements and then a more elongated, edgy Zenon solo backed by percolating drums, after which he joins with Mitchell and the bevy of drums to take it home. “Raw Urbane” begins more with a contemporary jazz sound from the inspired playing of both Mitchell and Zenon, augmented by animated drumming and the joyous vocals that close it.

The title track begins with Mitchell and drums before shifting into different rhythmic patterns as Zenon soars about the clatter, and Mitchell plays vibrantly and exploratively. This writer can’t help but hear strains of Mingus’ classic “Haitian Fight Song” here with the riveting and tricky pulse generated by Mitchell, Zenon, and the drums. The closing “Vulgar Cycle” has the vocalists returning in jubilant fashion, joining with the drums in the traditional Vodou style, brought to a glorious instrumental climax.

This is unique, stirring, and exhilarating music that deserves to be much more widely heard than it inevitably will be. It must be incredibly challenging to play but it results in an immensely uplifting listen. If you think this overly hyped, check out this quote from Zenon – “I’ve been on the scene, and know a lot of people, but projects like this are the kind of thing you live for.” Take those words and make it your goal to seek this one out.