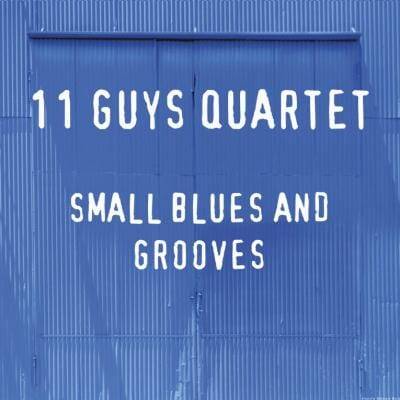 Vizztone Label Group President Richard Rosenblatt was a harmonica player and session musician when he started out in the 1970’s. In 1985 he launched Tone-Cool Records and the first album released on that label was the 11th Hour Band “Hot Time in The City” with Rosenblatt featured on harp. The four members pursued other opportunities but over the years would re-unite from time to time. In 2008 they decided to go into the studio and record some original instrumentals. Although eleven years have passed this is that recording session.

The word small means without force or loudness. The first of the fourteen tracks is also the first track released for airplay. The infectious instrumental “Road Trippin” features a Freddie King styled groove and Rosenblatt’s harp dancin’ about. The band is tight but who are these other Guys?

In 1967 I was a student at The University of Cincinnati and much of my musical preferences were formulated during the years spent there. One band I saw that really    impressed me was The Colwell-Winfield Blues Band. That band featured twin saxophones and I purchased their album “Cold Wind Blues” in 1968. Their drummer Chuck Purro is one of the Guys! In 1974 Purro was the drummer in The James Montgomery Band and he appears on their 1974 Capricorn records “High Roller” album. Purro sang lead on two songs he wrote for that album. Purro went on to play with Bonnie Raitt, Buddy Guy, John Lee Hooker, Chuck Berry, Van Morrison, Susan Tedeschi, and Paul Rishell & Annie Raines. He currently owns and operates a book store in Plymouth, Ma.

While Purro was in The James Montgomery Band and also appearing on that 1974 recording is bassist Bill “Coach” Mather, another Guy! Mather also appears on Paul Lenart’s 1993 “Electric Blues” album. Lenart is the fourth Guy! Guitarist Lenart who has several other albums of his own was also the lead guitarist in “The Far Cry” a Boston based Psychedelic Rock Band. Lenart has also toured with both T-Bone Walker and Big Mama Thornton as part of The American Folk Blues Festival; and appeared on Keith Moon’s solo album.

The groove the Quartet digs into continues throughout the session until they close with “Swamp Ride” a variation on Slim Harpo’s “Baby Scratch My Back”. We’re lucky that the Guys are still around to enjoy. Hopefully Rosenblatt, Purro, Mather and Lenart will unite long enough to record another album.