Trevor B. Power What Is Real 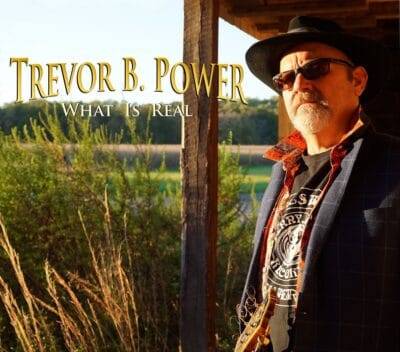 New Jersey’s Trevor B. Power began playing the guitar when he was fifteen. He was inspired by the rock n’ roll of the sixties and seventies, and spent most of his adult life playing solo acoustic at coffee houses and bars in the northeast and Arizona. Power became a DJ at Centenary College’s public radio station, WNTI, where he further schooled himself on blues, and the music business in general. He was encouraged by Bobby Whitlock, of “Derek and the Dominoes”, to play and write more of his own music. Power released his critically acclaimed debut, “Everyday Angel”, and it was among the Roots Music Reports Best Blues Rock Albums of 2019.

For his sophomore release Power returned to the Sonic Boom Recording Studio in Raritan, New Jersey. Power, guitar, harmonica, and vocals; is once again joined by Producer/Engineer Anthony Krizan of The Spin Doctors, guitars, drums, bass, tambourine, and vocals. Rounding out the band are Rob Clores, keyboards; Will Wilde, harmonica; and background vocalists Danielle Illario, Matt Migliorino, and John Ginty. All songs are written by Power.

The songs included on “What Is Real” are inspired by some of our greatest songwriters; and a direct result of bearing witness to the spectacle of 2020. The topical “World Gone Madd” features Power as he sings “it’s all bad news, what can I say” with some fine slide guitar, as the background singers echo the chorus “it’s a world gone madd”.  On “Get Well Johnny” Power tells us about his older brother, but it’s the harmonica wielding Wilde who plays the emotive solo. “Pandemic 2020”, the first song released for airplay, is a Bruce Springsteen styled anthem and another song composed by Power during the lockdown “with all of our money, we can’t stop the pain”.

The poignant “I’m Still In”, is a country styled ballad, about a waning relationship. “Easier Way” is a rumbling blues shuffle. My favorite “Life Is Good” is a rockin’ tune, that is both cynical and optimistic at the same time.  “Sexy Witch”. and “I’m A Fool” with the lyric “for doing what I want to”, are inspired by songwriters Jagger and Richards. “Woman” is another relationship song; while the Johnny Cash styled acoustic closer, “This Old Road”, ends with a ray of hope. As a vocalist Power often reminds me of Bob Dylan.

Power has been influenced by some of our generations greatest songwriters as he combines his blues with rock n’ roll and Americana.