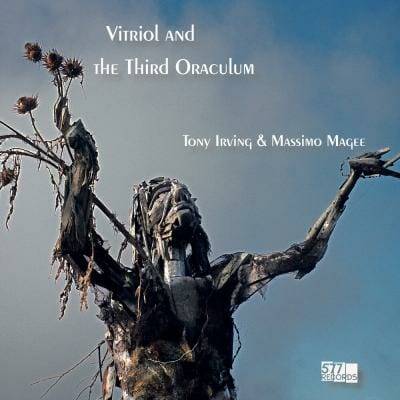 Vitriol and the Third Oraculum

This is today’s free jazz from two London artists. It’s either your thing or it’s clearly not. There’re no fence sitting for music like this. For reference points think of John Coltrane’s Interstellar Space, a duo with drummer Rashied Ali. Or, the long length Pharoah Sanders albums like Karma, where one piece constituted an entire LP side.  Or, more recently, one could point to The Sons of Kemet with the fiery interaction of tenor saxophonist Shabaka Hutchings and tuba player Theon Cross, backed by two drummers. Magee, like Hutchings and Nubya Garcia, is one of the leading saxophonists of the pulsating London jazz scene. Paired with drummer Tony Irving (from legendary UK group AscensIon), these explosive live recordings (only three pieces with one at almost 26 minutes) on the aptly titled Vitriol and the Third Oraculum capture the duo in fiery, aggressive, incendiary flight from their early 2019 UK tour.

The music is an impassioned in-the-moment emotional statement of transcendental yearning, refracted through some of the more intense possibilities of the acoustic drum kit and saxophone (the latter much more prominent in the mix by the way). As with the vanguard artists of the free jazz movement like Trane, Sanders, Ornette, Don Cherry, Albert Ayler and others, the music depicts the essential human struggle, with urgency and insistence that reflects the contemporary condition. There’s not much point in analyzing it or reviewing it in the normal sense. It doesn’t lend itself to that but instead stands as an invitation to shut out the rest of the world, dive in, and appreciate what they are expressing. It cannot equate to the live experience which adds so much visually but one can make their own visualization while listening. This writer goes back to The Sons of Kemet at last summer’s Newport Jazz Fest, where the crowd rose to their feet twenty minutes into the set and remained standing for the next forty. Irving and Magee may have a similar captivating effect when listening.