The Mckee Brothers are Making a Scene 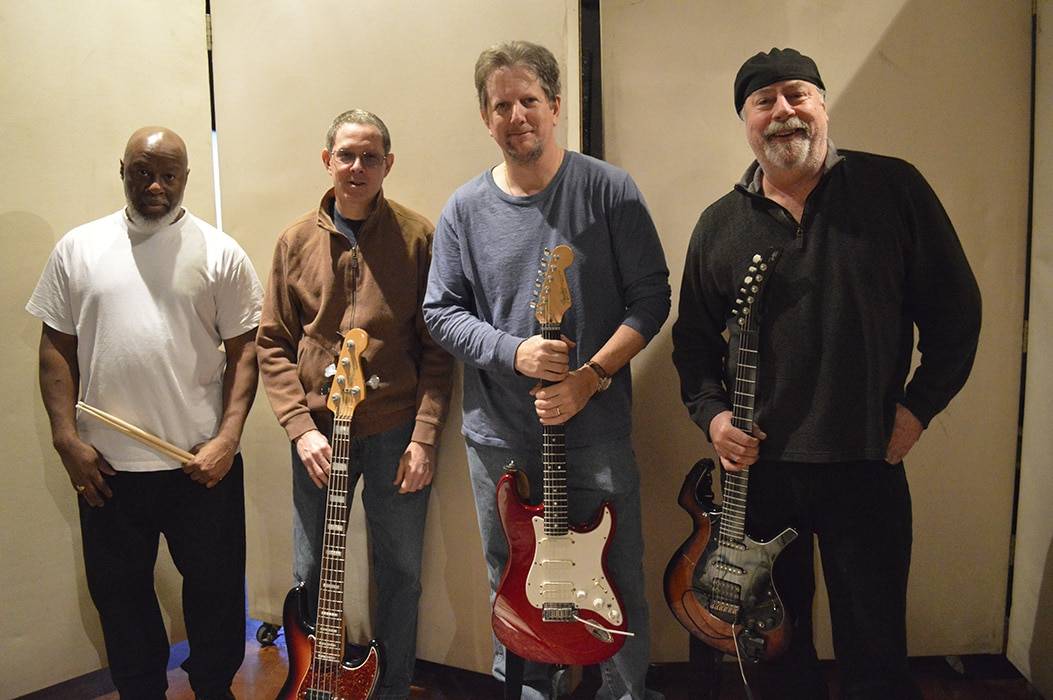 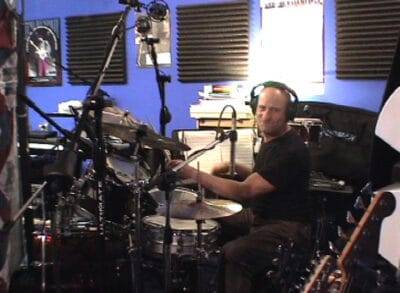 The roots of the McKee Bros. project go back to 70s Ann Arbor and Detroit, where Ralph McKee, inspired by his college roommate, guitarist Bob Doezema (now a Berklee professor who tours with Al Kooper), bought a cheap bass and a Silvertone amp and started to teach himself to play. After a couple of years of jamming with guitarist Grant Cherry and bongo player Pat “Doc” Roberts, Ralph began to play professionally with the eclectic All Directions band, playing funk, jazz, blues, fusion and rock in local clubs and occasionally backing touring artists, including the Drifters and jazz drummer/vocalist Grady Tate. Ralph and Doc picked out a set of bongos for Denis (11 years younger), who then also picked up alto sax in school band.

In 1980, Ralph was playing in funk/jazz band Big Fun with sax player Stephen Dreyfuss, guitarist Pete Reed and drummer Bill Gracie. Pete and Ralph picked out a Strat for 15-year- old Denis, who had been picking on an acoustic for a year . That Strat got heavy use, and is still owned by Denis, although with many different parts.

While in Big Fun, Ralph had the opportunity to play a few shows with Michigan legend vocalist/keyboardist/sax player Bob Schultz. Schultz was featured in the early Bob Seger band; his organ playing was one of the prime reasons Ramblin’Gamblin’Man was played non-stop in high school jukeboxes in the late 60s.

Many years later, Denis met Schultz while sitting in with the Blue Avenue Delegates at the Green Door in Lansing.  He was sitting in after being invited by the late, great, guitarist, Jerry Glassel, with whom Denis had made the weekly drive from Lansing to Jackson for two years to study with the virtuoso.   At the time, that band had been the house band on Monday for over ten years.   If a good musician didn’t have another gig on Mondays, he was likely to be hanging out at the Green Door. 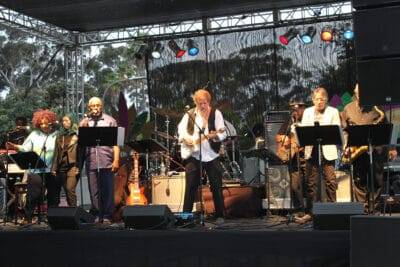 In the early 1980s, Big Fun morphed into reggae/funk band the Pulsations, fronted by Tony Hill (older brother of Ann Arbor blues man Al Hill, longtime bandleader for soul singer Bettye La Vette). The Pulsations played primarily Bob Marley, Toots and the Maytals and the like, with an occasional Al Green or Maze tune thrown in. Denis, though not yet old enough to get into bars without a parent, came to a few Pulsation shows and fell under the spell of reggae too, though more in the Police vein.

In that same era, Pulsations drummer Bill Gracie invited Ralph to play in a wedding and party band with Detroit rock guitarist Gary Quackenbush, well-known for his late 60s work in Capitol Records band SRC, and keyboard man Bob Wilson, then recently off the road with Freddie King and Kris Kristofferson. Thirty years later, Ralph played in a sold-out SRC reunion show at The Magic Bag in Detroit. 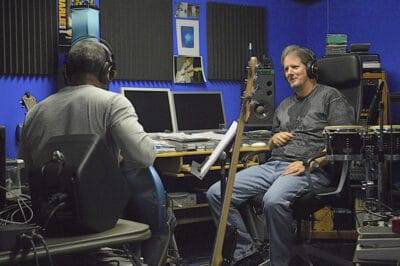 In 1983, Ralph went to law school, where his classmates included jazz guitarist Thom Douvan (now based in California, with 3 records out) and sax player Louis Johnson. Thom and Louis later played in a band with Motown session pianist Johnny Griffith and drummer Pistol Allen. Sitting in with them certainly taught the value of playing in the pocket!

Law school and early years of practicing law left little time for music, but Ralph did manage to play some weddings and casuals with the band Continuum; the members included Pat Sorise and Mike Ager from the All Directions days.  Denis occasionally played casuals with Continuum before his move to LA.  In the late 90s, the Pulsations with Tony Hill and Bill Gracie reformed as a blues band, with two much younger players adding new blood.   Ralph also began a 15-year run of gigs with singer/songwriter/guitarist Keith Kiser as the duo Bridge Club (later a trio with pedal steel player Mark O’Boyle), recording 2 CDs at Big Sky Recording in Ann Arbor, and playing shows with soul diva Lady Sunshine and the X Band. 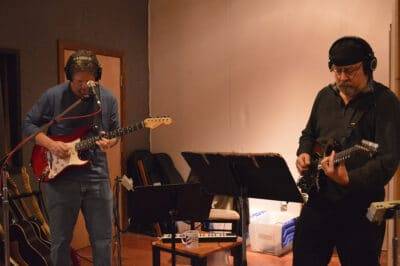 When the Pulsations disbanded in 2002, Ralph began working regularly with the Blue Rays, featuring guitarist/singer Dave Kaftan, keyboard man Jim Neal, drummer Hugh Huntley, and, later, vocalist Angel Tristan, who hailed from Baton Rouge (or Red Stick, as she called it).  Sadly, Angel passed away from cancer in 2007, leaving behind only one CD that was not commercially released.  The Blue Rays continued to work as a 4-piece and now have added Damien Hyde on tenor sax, with Ralph and Dave Kaftan sharing the vocals.

In August 2001, Denis and Ralph decided to do some recording in Michigan.  Some 27 pieces were recorded in a week, mostly at Big Sky and Stan Budzinski’s farmhouse near Lansing.   Much of the material was blues and R&B; the players included funky funky Jerome Edmondson on drums and vocals, the late great Bob “Bubba” Grudner on drums on some tracks, Stan Budzinski on slide guitar, and Bob Schultz on vocals.  They also recorded 4 Cal Tjader/Clare Fisher tunes with the outstanding Latin jazz group Los Gatos (Pete Siers on timbales, Cary Kocher vibes, Brian DiBlassio on piano, Jonathan Ovalle on congas, and Kurt Krahnke on bass on 2 tracks), and a few tracks with guitarist Rick Humesky and drummer Glenn Giordano from the X Band.   Some of the songs from the 2002 sessions will be included (after major additions) in the current project.  As they say, sometimes gumbo has to simmer for a while! 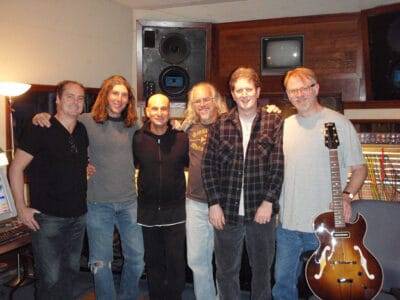 In 2010, singer/guitarist Marsha Gayle worked some show with the Blue Rays.  She later became a solo performer playing a wide variety of material; Ralph often plays with her as a duo, or with added guitarist/singer Peter Holland and harp player Dave Purdy, and also plays with Holland as a duo.   In that same year, Ralph’s long-time rhythm section mate Bill Gracie passed away.  At the wake, singer/songwriter David Rossiter ( a high school bandmate of Bill’s) heard Ralph play Amazing Grace and the old Fred McDowell tune You Got To Move on electric lap steel, along with some bass, and decided to call Ralph to be part of his edgy alt/country band Hoodang.  Hoodang also features Dave Keeney on guitar, virtuoso lap steel, and vocals, his wife Sophia Hanifi on vocals, and John Crawford on drums.  Hoodang works regularly, has recorded an outstanding CD called Blissfield at Big Sky, and continues to appear at big events like the Ann Arbor Summer Festival.

Sara Petite is Making a Scene

Veronica Lewis is Making a Scene