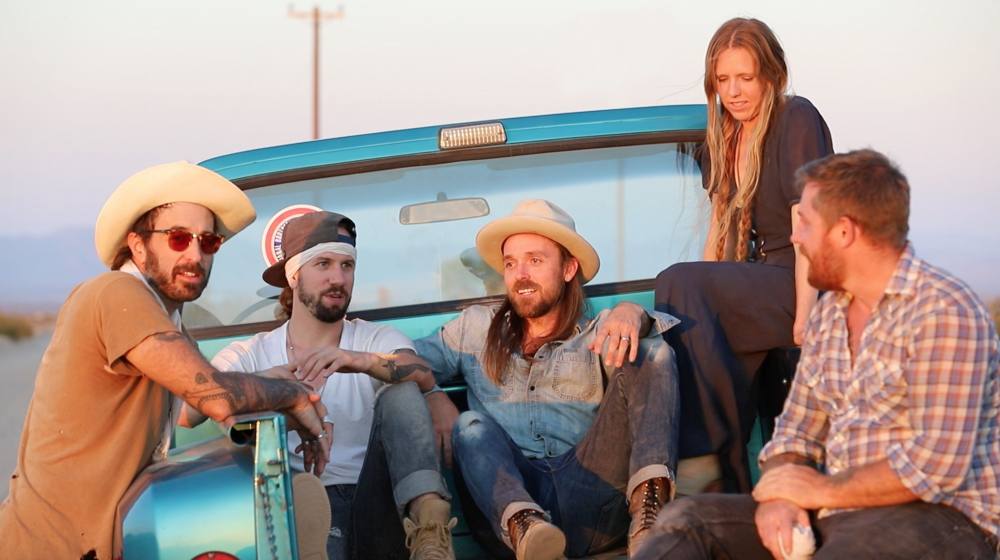 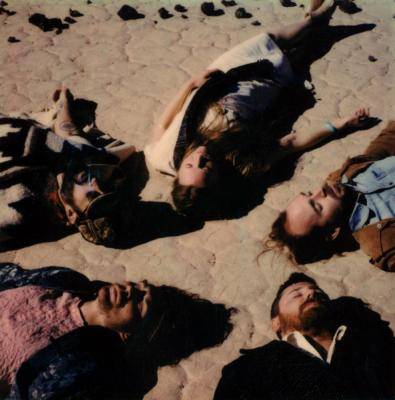 All The Space That There Is, the new album from The Adobe Collective, out on January 10th, 2020 on Love/Sands Records.

The Adobe Collective effortlessly embody what is rapidly becoming known as the “high desert sound”. Based in Joshua Tree, CA their surroundings reflect a kind of no-frills authenticity that is baked into their music – cosmic desert americana with flashes of psychedelia, country, and indie rock. At times hard hitting, at other times heartfelt and tender, rather than stick to a ready-made musical template, they let the rhythms of the California desert guide their creative path.

Founded in 2011 by husband and wife duo Tim and Faith Chinnock at their 1937 historic adobe house just minutes from the entrance to Joshua Tree Park, the current lineup includes Caleb Winn, Chris Unck, and Tyler Saraca.

Working out of Unck’s High Lonesome Studio, their third full length album All The Space That There Is, a self produced effort, was crafted in an un-rushed process through stream of consciousness musings from the past and present. “I’m always pleasantly surprised by how consistently seemingly unrelated thoughts can fit together to make a cohesive story out here in the desert,” Tim reflects. “Almost like the subconscious can see the through-line before the conscious mind realizes what is happening.” Unck adds, “With Adobe we’re always saying, ‘what haven’t we done?’ we want to look around and explore.” It’s a complex album filled with a sense of wonder — three-part harmonies here, lush synth layers, steel guitar flourishes, and epic drum swells there— meant to give a peek into the challenges and successes of making an authentic life in the American Southwest. All The Space That There Is will woo you, take you in, then send you rocketing out into the cosmos. 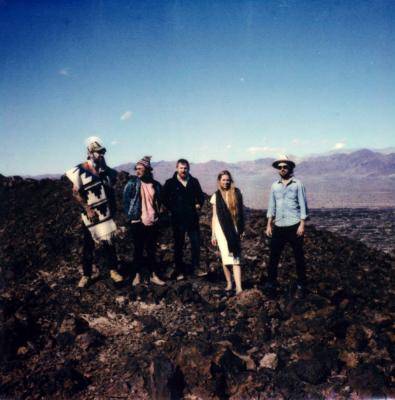 Tim and Faith’s harmonies blend effortlessly — which makes sense since they first began singing together as high school sweethearts — as the band brings a unique energy and sound. Unck spent time touring the world opening for Pink with Atlanta based southern rocker Butch Walker, Caleb grew up playing rock ’n roll in Ohio and later joining the house band at legendary live music venue Pappy and Harriet’s, and Tyler who has played with other High Desert groups Desert Rhythm Project and Gene Evaro Jr. landed in the desert with his Boston based band Build A Machine and decided to stay even when his bandmates gave up the rent and skipped town. The Adobe Collective have a sound all their own but have been listed next to artists like Gram Parsons, Queens of the Stone Age, Cracker, and Donovan as acts that embody the high desert sound. This album further solidifies their place in the high desert music pantheon.

As the name implies All The Space That There Is covers a lot of ground — especially sonically. Mid-tempo chill, up-tempo indie pop, stratospheric jams, flashes of psych rock, and even some good ‘ol country twang. “It was like a zen moment…an out of body experience,” say Unck about his simultaneous roles recording, co-producing, and playing lead guitar. “I suspend myself somewhere in between placing mics, pushing the record button, listening for the count off, and playing what comes to me. It usually reveals something super odd and then I get excited. I try to keep only what is exciting.” To further add layers of desert influence, the band called on Joshua Tree neighbor Nathan Sabatino (who is best known for his work with the Philadelphia band Dr. Dog) to mix the album. Sabatino’s warm touch is evident throughout and along with mastering by Los Angeles based Brian Lucey (mastered 7 Grammy winning records) this album shimmers. 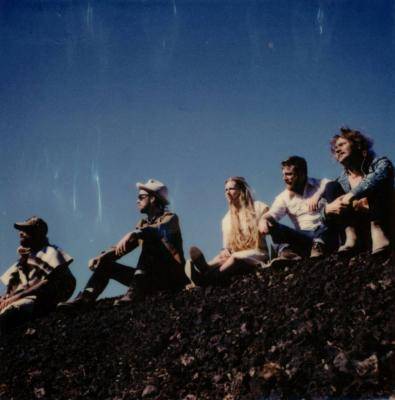 Tim and Faith draw on their nearly 20 year relationship for the duet “Warm to Me” which starts with a heavy anthem-rock drum beat but morphs quickly into a groovy lover’s quarrel showcasing Unck’s slippery steel guitar, and Spencer’s happy-go-lucky bass lines overlaid by Faith’s mellotron wash. “I love and hate that song so much,” says Faith, “It’s good to hear it over and over again because each time I hear it I can accept that’s what we went through and that we got through it and we’re OK now.”

It was this varied blend of melodic craftsmanship and quality lyrical content that turned heads on the group’s previous album Take Heart, Take Care which landed them main stage performances at the Joshua Tree Music Festival, headlining shows at one of America’s best stages — Pappy & Harriet’s — and opening slots for national touring acts like Christopher Paul Stelling (-Anti), Little Wings (Woodsist) The Renderers (Ba Da Bing) and stirred up both regional press (Palm Springs Life, Coachella Valley Weekly) as well as national radio play. Additionally, THTC was nominated for Best Unsigned Album by Coachella Valley Weekly and netted a high profile nod from USA Today who listed it as one of the “Top 20 Albums to Discover the High Desert Sound.”