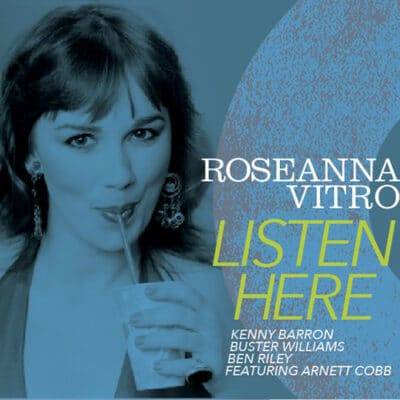 Vocalist Roseanna Vitro, who has led a multi-faceted career as performer, recording artist, educator, and journalist has delivered well over a dozen albums since her debut in the early ‘80s with Listen Here. This debut, recorded in the fall of 1982 and released in 1984, featured an impressive supporting cast in the Kenny Barron Trio, with bassist Buster Williams and drummer Ben Riley joining the iconic pianist and NEA Jazz Master.  Also appearing are the redoubtable late Texas tenor saxophonist Arnett Cobb, guitarist Scott Hardy, percussionist Duduka Da Fonseca and pianist Bliss Rodriguez on “Centerpiece.”  Additionally, Fred Hersch did all the arrangements and Steve Allen provided liner notes. To launch a career with such formidable support is a testament to the natural vocal talents of Vitro, who has certainly grown since, shows glimpses of a little girl’s voice that has since morphed into deeper, more resonant tonality but nonetheless displays a confident level of maturity in this setting.

So, yes there are stronger vocal albums for Vitro as you’d guess, especially the ‘90s gems Softly, Passion Dance and Catchin’ Some Rays: The Music of Ray Charles.  This debut is a collection of standards such as “I Love you Madly,” “It Could Happen to You,” “No More Blues” and “You Took Advantage of Me” among the fare. Vitro seems equally comfortable in the blues formats, having come up under the tutelage of Cobb in Houston, as she does on the jazz tunes, with an ability to scat like Ella which she does on “Love You Madly.” She tackles boss nova on “This Happy Madness” and is daring enough to close the album, displaying impressive range with a glorious take on the Sarah Vaughan staple, “Black Coffee.” Along with that standout, this writer, of course, favors the tunes that feature the fat, full-bodied tenor of Cobb – “Centerpiece,” “Love You Madly,” and “It Could Happen to You.”

Vitro decided to re-release because the time was right. She and her husband Paul Wickliffe, an accomplished sound engineer, recently became grandparents, prompted her to do some retrospection. “Some of my earlier records were never transformed to a digital format, so they are no longer available. And many reviewers and DJs who have known me over the years have moved on. I think these early recordings stand the test of time, and I want to introduce them to a new generation.”

We did cover her most recent release, 2018’s Tell the Truth, on these pages and the repertoire, though slightly tilted toward racial justice, also contains familiar standards. Vitro, originally from Arkansas, began her career in Houston as a protégé of Cobb’s and singer-educator Ray Sullenger. She became a fixture in the Houston jazz scene, going on to play with Oscar Peterson, Tommy Flanagan, Bill Evans, and others. Her move to New York put her square in the forefront of such notables as Hersch, Kenny Werner, Mark Soskin, Elvin Jones, and Eddie Gomez along with countless others. She has since delivered 13 more albums, receiving a Grammy nomination for 2011’s The Music of Randy Newman.

Vitro’s many fans and jazz vocal fans in general should welcome this release. It’s always interesting to hear debuts from veteran artists. Vitro shows that she had the goods then and has only gotten better since.