Neil Barnes Bald Guy With A Lot On His Mind 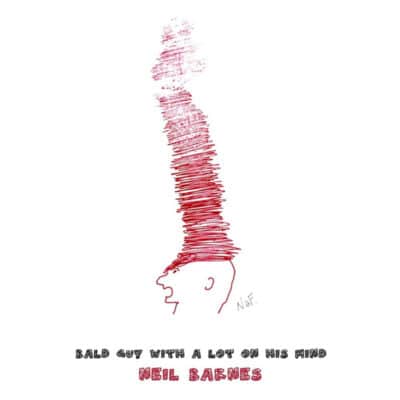 Bald Guy With A Lot On His Mind

The San Francisco Bay Area’s Neil Barnes is a harmonica player strongly influenced by Paul Butterfield, Muddy Waters, Charlie Musselwhite and Lee Oscar.  He was able to hangout, up close and personal, and witness Freddie King, Albert King and Albert Collins. During the 1980’s he formed his own band “Bar-B-Q Barnes and the Rib Tones”, and recorded a single and a follow-up EP. He has shared the stage with Francis Clay and Luther Tucker; and recorded with keyboardists Little Willie Littlefield, Bob Gomes and Mark Naftalin; guitarists Ron Thompson, Junior Watson and Sonny Lane; bassist Bill Stuve, and drummer Robert Montes. As a producer Barnes is most noted for his 2014 project “Hyde and Seek” featuring Earl Thomas; Lady Bianca, and former John Lee Hooker bandleader Thompson. He has also produced a single for Lady Bianca, and just released this new project.

The ten tracks are broken down by recording studio. Recorded by producers Kid Andersen and Neil Barnes at Andersen’s Greaseland Studios in San Jose is the jazzy opening track “Going To Greaseland (a.k.a Cruisin’ Down Crystal Ridge)”.  Barnes states that the elation of driving to the session is comparable with the exhilaration of skiing down the slope at Nevada’s Crystal Ridge. Featured on this Barnes’ original are guitarists Andersen, and Johnny Cat Soubrand; pianist Sid Morris; bassist Mike Phillips, and drummer June Core. A second song recorded during the same session is Chuck Berry’s instrumental “Deep Feeling” with some outstanding harmonica from Barnes, and piano from Morris.

Also recorded at Greaseland are four more tracks featuring vocalist Lauren Halliwell. Included are “I Don’t Hurt Anymore” first recorded by Dinah Washington; The Band’s “Ophelia” with Andersen on guitar; Ray Charles’ “Funny But I Still Love You” featuring pianist Morris and Andersen on an acoustic; and my favorite “Wait, Wait, Wait”. The latter is credited to Naomi Neville, a pseudonym used by Allen Toussaint, and was learned from Tracy Nelson as the song appears on Mother Earth’s 1969 album “Make A Joyful Noise”. Halliwell is wonderful on these, while Barnes playa some sweet harmonica.

Produced by Barnes and Charlie Beutter are two songs recorded at the Hyde Street Studios, and left off of that 2014 project. The first is an alternate take on the gospel tune “Rough Side of The Mountain” written by the Reverend F.C. Barnes (no relation), and featuring a vocal duet between Earl Thomas and Lady Bianca with Thompson added on guitar; and the rockin’ “Sugar Mama” recorded after the session was over while everyone was “breaking down” and heading home. Featured on the latter are guitarist Thompson, drummer Winfred Williams, and Barnes once again blowin’ harp.

Two more Barnes songs were recorded at Jon Atkinson’s Bigtone Studio when it was still located in Hayward Ca. “Placerville Gold” is about a coffee shop owned by Barnes’ wife Jill, located in the Gold Rush town of Placerville in the Sierra Nevada foothills, and is sung by Kyle Jester; and “Along Came The Blues” inspired by a National Geographic documentary on spiders and how for most of our lives they’re a lot closer than you think “blues is like a spider crawling all around you, I think they’re here to stay”.

This is another well produced recording from Barnes which can comfortably sit alongside 2014’s “Hyde and Seek”. Might as well check them both out.