Myles Goodwyn Friends Of The Blues 2 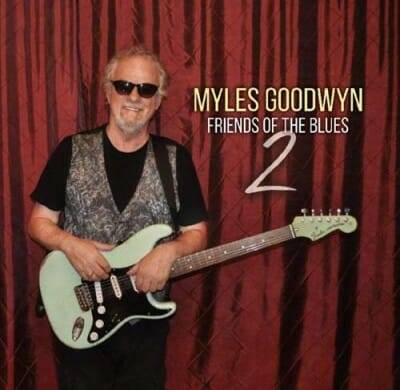 Friends Of The Blues 2

Myles Goodwyn’s interest in the blues began in the 1960’s when he first heard B.B. King, Howlin’ Wolf, and Muddy Waters. A prolific songwriter he began writing blues songs but saved them for the blues album he knew he would someday make. Goodwyn is a founding member of the Canadian rock band April Wine who released their debut album in 1971. He is a legend in Canadian Rock history having recorded sixteen April Wine albums which Internationally sold over 20 million copies. He is a 2010 inductee in the Canadian Music Hall of Fame.

In March of 2018 Goodwyn finally released his blues album “Myles Goodwyn And Friends Of The Blues” resulting in a Juno award nomination (Canada’s equivalent to our Grammy Awards). This is his follow-up recording. Goodwyn, guitars, keyboards and all lead vocals; is joined by Bruce Dixon or Richard Pallus, bass; and JR Smith, Scott Ferguson, Mike Carrol, or Blair Mackay, drums. The background singers are Reeny Smith and Lisa MacDougall. All of the songs are written by Goodwin unless otherwise noted. Goodwyn states “I wanted to write some good blues…I really appreciate great blues material because it is timeless…” Once again Goodwyn’s decision was to use only “real blues players” and so guesting is a “who’s who” of the Canadian blues music scene.

Goodwyn opens with “Hip Hip”. Sitting in is pianist Kenny “Blues Boss” Wayne who was born in Spokane, Washington but moved to Vancouver in 1980. Wayne has multiple Juno award nominations and won in 2006. In 2012 Wayne received a Blues Music Award nomination for Pinetop Perkins Piano Player of The Year. Wayne has ten albums overall; four since 2011 when he signed with Canada’s Stony Plain Records. The first thing we notice is Goodwyn’s vocal clarity and guitar solo before Wayne takes off on one of his own.

Like A Dog Ain’t Had It’s Day” features keyboardist Ross Billard and Matt Anderson on acoustic guitar. Anderson plays acoustic again on the well written “You Got It Bad” with Dewy Reeds on harmonica. The fabulous “Fish Tank Blues” was co-written by Goodwyn with Will Van Hansolo who joins him on slide guitar.

Guitarist David Gogo plays on “I Saw Someone That Wasn’t There (And It Was You)”. Slide guitarist John Campbelljohn is featured on “Daddy Needs New Shoes” and on the only cover “All Over Now” written by Bobby and Shirley Womack and recorded by The Rolling Stones in 1964; on the latter Goodwyn gives the arrangement a ska type beat with Billard on organ, John Main on piano, and Shrimp Daddy on harmonica. “Speedo (Revisited)” is inspired by the original recorded by the Cadillacs in 1957; Jeff Mosher is featured on saxophone, and Warren Robert on guitar.

“Being Good (Won’t Do Us Any Good Tonight)” is a duet with Angel Forrest, a six-time Maple Blues Award winning “Female Vocalist of The Year”. The closer is the country styled “Even Singing Cowboys Get The Blues”, a tribute dedicated to the memory of Goodwyn’s late friend the Song Man Ralph Murphy, featuring guitarists Jack De Keyser and Campelljohn.

I have not been able to mention all of Goodwyn’s friends that participated in the making of this recording. Goodwyn is a gifted singer and songwriter who knows what it takes to make a fine blues album.