Michael Dease Give It All You Got 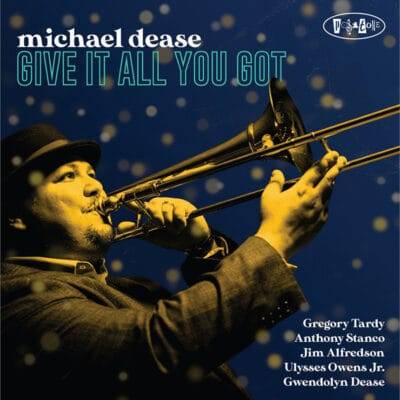 Give It All You Got

Recalling many of those great Blue Note albums with trombonist Curtis Fuller and Art Blakey, Give It All You Got, the eighth Posi-Tone release by one of today’s leading voices on the trombone, Michael Dease, carries that infectious soul-jazz vibe and percolates with similar energy. Dease has appeared over 200 recordings wirh groups as diverse as Grammy winning artists David Sanborn, Christian McBride, Michel Camilo, and Alicia Keys.  This one garners inspiration from his life in jazz education.. It focuses on North Carolina’s The Jazz Institute at Brevard Music Center, which is a two-week summer intensive workshop for 80 dedicated students that follow Dease’s custom-designed curriculum for traditional and progressive jazz study. Most of the musicians on the album are Brevard faculty members as well.

Dease’s opener “Sliver of Silver” was inspired by a 2018 visit to Brevard by famed trumpeter Randy Brecker, who played with the piano icon when first coming up. Throughout Alfredson’s sizzling B3 gives the proceedings a different color than those Blue Note recordings referenced earlier but this straight-ahead hard bop is terrific whether listening to Tardy’s tenor on “The Next Level” or the leader making his own poignant statements. “Parker’s Fancy,” written by drummer Luther S. Allison is not about Bird, but instead for Dr. Andrew Parker of the Institute. It’s familiar sounding groove fits as easily here as it could have in that glorious soul-jazz era of the early ‘60s with sparkling turns from trumpeter Stanco, Tardy, and the leader. Dease’s “Word to the Wise” is a mid-tempo piece with the leader in conversation with Alfredson until Tardy enters midway and the entire sextet brings it home.

“Dave’s Boogie-Down,” as title suggests, is a white-hot burner, written by Alfredson but named for David Sanborn, with whom Dease toured extensively. This one features a blistering solo from altoist Sharel Cassity, one of Dease’s most inspired spots, with Tardy and Alfredson on fire as well, bringing it all to an explosive boil before the abrupt end. We then find the soothing Brazilian tones of “Ritmo De Brevard,” a nod to both Brazilian music and especially Dease’s mentor, the late Claudio Roditi as heard in the reverent tones near the end. “Lake Toxaway Getaway” is another Alfredson composition named for LakeToxaway Country Club where the jazz students from Brevard perform a 90-minute show as part of the curriculum. This is joyous tune, capturing the excitement of the students riding the “big ol’ white school bus” making the mountain climb to the site.

“Zanderfied,” named for the founders of the Institute, features an especially soulful Stanley Turrentine-like take from Tardy and the only guitar spot, a bluesy one, for Randy Alexander. “Climb the Mountain,” by Stanco, is Dease’s favorite track, as true to its name, it just keeps building, beginning rather calmly with turns from all three horns before Alfredson sets the stage for the crescendo, the last notes reflecting a deep exhale, as they have reached the summit. “Transylvania County Funk Parade,” the closer, written on the spot by Dease, is an ode to the collective band members roots in blues and soul. Tardy is on fire pushed by Owens Jr. Dease and Alfredson keep the cauldron boiling before the ensemble takes it out. In his notes Dease has this – “Dig these origins: Tardy/NOLA, Stanco/Detroit, Ulysess/JAX, Alfredson & Brooklyn/Lansing, Luther/Charlotte, Gwen/STL, Sharel/OKC, Napoleon/Ann Arbor (we’ll let that one slide) & Dease/Augusta, GA. These are places that like their Blues and Brevard’s Transylvania County is right in there.”

This is one smoking session!  Highly recommended.