Erin Harpe is Making a Scene 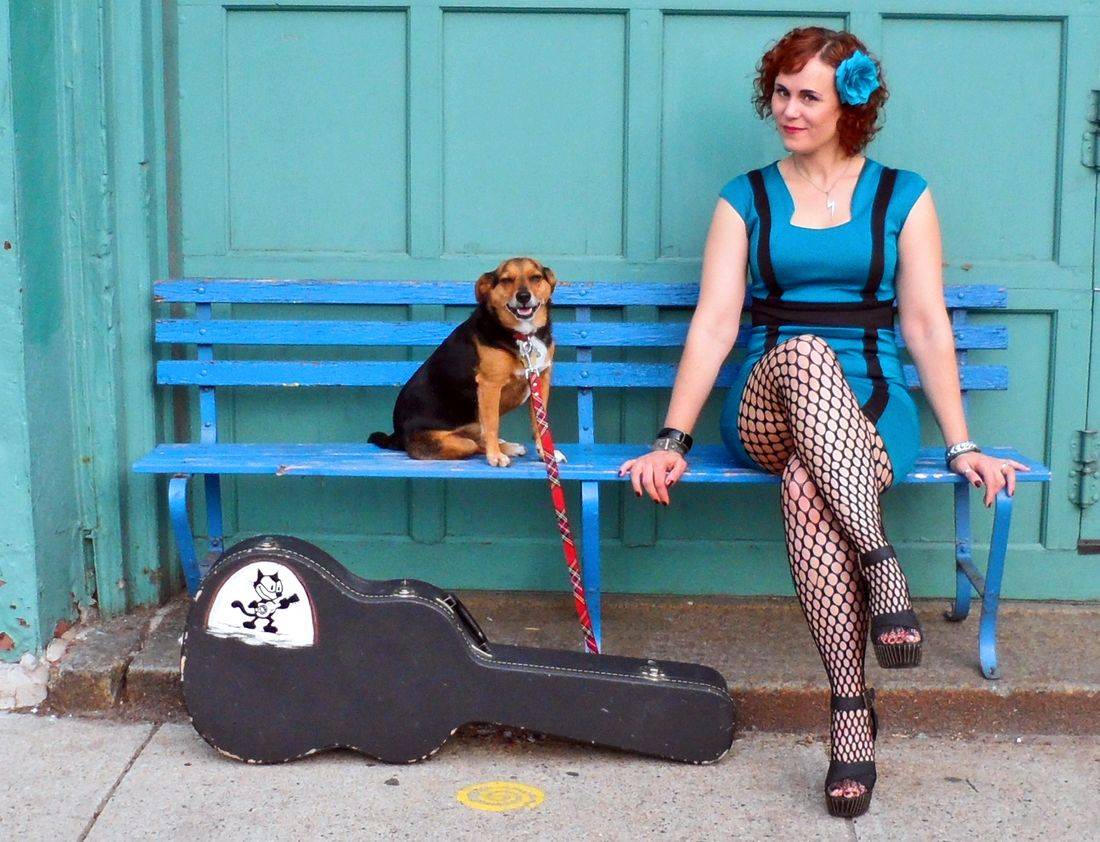 Making a Scene Presents an Interview with Erin Harpe 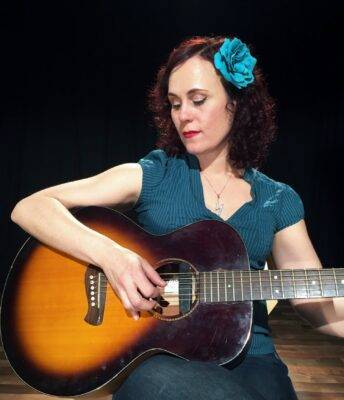 “When I listen to the blues, it makes me want to cry—it’s a part of me—but before making this album, I felt I was neglecting the acoustic blues woman in me,” award-winning blues artist and educator Erin Harpe shares. Erin proudly acknowledges the acoustic blues woman in her with the return-to-roots duo record, Meet Me In The Middle, out now on VizzTone/Juicy Juju Records! It is an album of joyous music made for desperate times. 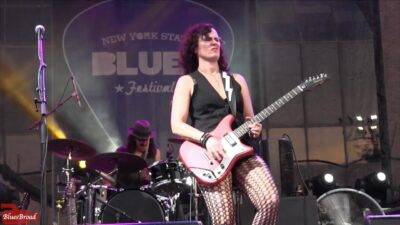 Erin has jammed with iconic acoustic blues artists Phil Wiggins (of Cephas and Wiggins), Warner Williams and Jay Summerour, Eleanor Ellis, Jontavious Willis, and James Montgomery. She’s opened for legends such as ZZ Top, T-Model Ford, Honeyboy Edwards, Roy Bookbinder, and James Cotton. Erin has played at the House of Blues, Caffe Lena, Club Passim, the International Blues Challenge, South by Southwest, the New York State Blues Festival, and many other festivals and venues around the US. Her Country Blues Duo has toured Spain and the UK twice.

Blues is the first music Erin remembers hearing, specifically Piedmont blues, a syncopated, fingerpicked variant of the blues popularized in the East coast region by artists such as Blind Blake and Josh White, and later Rev. Gary Davis and Cephas & Wiggins. Arlo Guthrie used Piedmont guitar accompaniment for his well-known monologue-style song “Alice’s Restaurant” which was Erin’s entry into playing this style.

Erin’s father is a blues fanatic, guitar collector, and talented performer who wrote a book about the highly coveted guitar brand, Stella Guitars, The Stella Guitar Book by Neil Harpe. She recorded a duo album with her father, Delta Blues Duets. Her mother played a little guitar, was a graphic designer, and met Erin’s father in the folk music scene. Growing up, Erin experienced blues music as the soundtrack to impromptu backyard jams and barbershop hoedowns. She later sought solace in it during her teenage years when she experienced her own blues, grappling with adolescence and her mother and father’s tumultuous relationship. 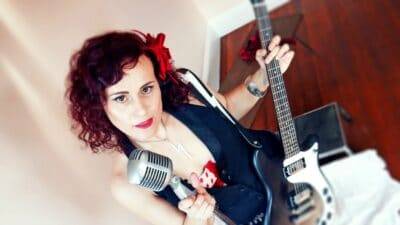 Before she embraced the blues as a musician, Erin staked out her own musical territory through playing flute and studying classical music. While in high school, a boy she had a crush on wanted to be the voice of the “Alice’s Restaurant” monologues. Erin saw this as a chance to win his affection through providing accompaniment. When she went home to ask her father to teach her the interweaving melodic pattern, he cautioned her of its difficulty. Pressed on by adolescent love she learned it and soon found her way into the blues.

During college, Erin studied abroad in Kenya and developed a love for Afro-pop. After graduation, she moved to Boston and began playing at coffee houses and open mics performing solo blues. This is where she met her husband, Jim, who remains a big part of Erin’s story, and co-founded with Erin the boutique label Juicy Juju Records. For a period of time, Erin took a detour from the blues, indulging her Afro-pop jones with Lovewhip which earned her a lot of plum exposure. However, in wake of the group’s success, she also found herself revisiting her father’s blues record collection. 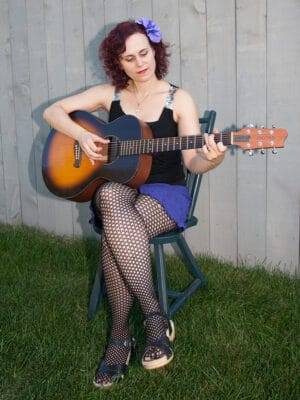 In 2010 Erin and Jim formed the band Erin Harpe & the Delta Swingers. After being invited to play NotSXSW (John Conquest’s Americana answer to South by Southwest) as a solo artist a few times, Erin and Jim decided it was time to start a blues band, and The Delta Swingers was born! In their first year as a band, they won the Boston Blues Challenge, and were in Memphis for the first time at the International Blues Challenge, as a quartet lead by acoustic guitar with electric bass and harmonica, and drums. While there, the band was asked to play the prestigious VizzTone Showcase at the Rum Boogie on Beale St. In the excitement of trying to impress the crowd, in the middle of the first song, Erin accidentally kicked over her acoustic guitar, breaking it’s neck. Luckily the host, Bob Margolin (Muddy Waters Band), was there, and what came next changed everything. He bestowed Erin with his Gibson Les Paul gold top electric guitar, and the band went electric. Since then, Erin has honed her sound, and her favorite electric guitars are her prized Epiphone Wilshires, through a Marshall Origin tube amp.

Erin’s new album Meet Me In The Middle is an inspired return to the country blues that shaped her. The 10-song album is produced by Erin—her third production credit—and co-produced and engineered by Jim. It was recorded during pandemic lockdown in the couple’s third-floor Boston apartment, using what they had on hand: namely, some acoustic guitars, including a 12-string, a ukulele bass, Erin’s foot as percussion, and a kazoo. To get a good recording at home the couple had to soundproof their entire studio with heavy curtains and floor coverings (because of neighbors being home–and also due to the constant noise of the city). For each take, they recall having to turn off the AC, and close the heavy curtains, making their accommodations unbearably hot.

The all-acoustic album features timely songs about hard times, division, and loss, as well as more hopeful subjects like dancing. “Meet Me In The Middle is about coming together, mourning our losses, and trying to find the bright side,” Erin says. Stylistically, it embraces a wide swath of Americana, including traditional country blues, folk, gospel and zydeco. 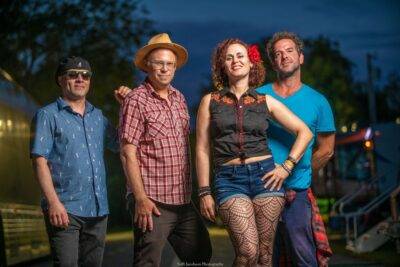 The album opens with the lead single, “All Night Long,” which is paired with a music video, filmed in Boston’s lush Franklin Park in Erin’s neighborhood of Jamaica Plain. The track is an original offering spiced with a dash of Clifton Chenier-style Cajun zydeco flair and Erin’s elegantly down-home slide guitar stylings. As a master of roots blues style, a producer, and a songwriter, her prowess as a singer can be underappreciated. Erin has a sweet, boozy swagger as a vocalist, and she conjures the Delta, the Bayou, the supper club, and the juke joint with nonchalant elegance. The jaunty country blues title track is a call for unity, and spotlights Erin’s buttery slide playing which is lyrical and swampy at the same time. Erin turns in a dexterous version of the blues evergreen “Rollin’ And Tumblin’.” Her rendition is frisky and rollicking, and it showcases the deft interlace of Jim’s supportive and buoyant basslines.

Erin’s elegantly elegiac version of the spiritual “When I Lay My Burden Down,” salutes the tender guitar stylings of Mississippi John Hurt. The achingly beautiful “One Fine Day” boasts graceful fingerstyle playing on a 12-string guitar, and haunting harmony vocals.

One hidden hero of Meet Me In The Middle is its producer. Erin’s production is sparse and crisp, and captures the warmth of a live performance. Her journey as a producer has been a natural evolution from hitting record on a mini disc player to watching fancy producers work and taking notes.  “For this album, I wanted people to feel like they were in the room with us—like they were sitting on the floor in front of me and Jim at a house party. We’ve all been so far apart, and I felt it was a good time for an album with this intimacy,” Erin says.