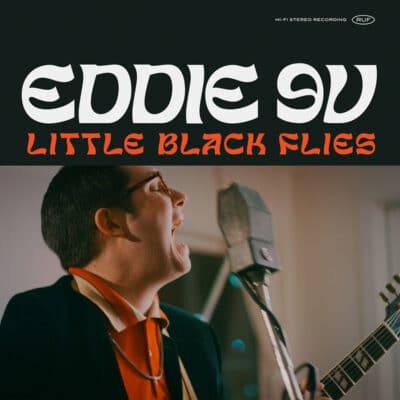 Atlanta blues man Eddie 9V is set to release Little Black Flies on Ruf Records May 28. While this is not Eddie ‘s first record, it is his first for an established record label. It was produced at Atlanta’s Echo Deco Studios Eddie’s brother, Lane Kelly.

Even though he is only 24 years old, Eddie is no newcomer to the stage. Indeed, he began performing in clubs around Atlanta at age 15 under his original name, Brooks Mason, with his brother Lane. My husband and I saw him perform that year, and I was surprised at how natural he was in front of an audience. This album, recorded live in the studio, shows he is just as natural on record. You even get some loose chatter between him and the other musicians, who include some of the cream of the Atlanta scene. The bassist, for instance, is Brandon Boone from the Tedeschi Trucks band. Another special guest is Cody Matlock, a former prodigy who has grown into a guitar hero and a long-time friend of Eddie’s.

One thing that has not changed with any of Eddie’s endeavors under any name is that the music is really excellent. There are 9 original tunes and 3 covers and they are all authentic, full of soul and true to Eddie’s blues roots while adding a modern twist.

Every track here is a winner, but “Little Black Flies” shows that Eddie 9V knows how to get dark and “3 AM in Chicago” is a hard look at life on the poor side of town. To balance the serious songs, there is the silly fun of “Columbus Zoo Blues” and the sassiness of “Miss Jane.

Mark your calendar for May 28 and pick out your own favorites from this amazing release from an explosive young artist who should be on your radar if he is not already!

Rale Micic Only Love Will Stay