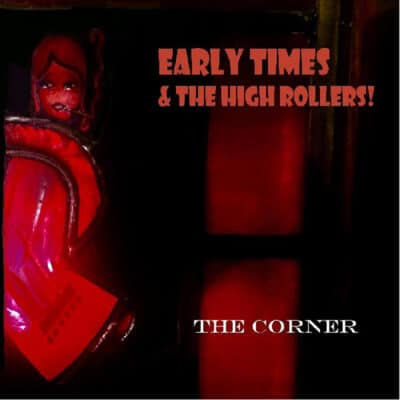 Sacramento raised Early Times is a blues guitarist who started playing professionally when he was sixteen. He formed his first band in 1990 and released his debut “Society for the Misunderstood”. His follow-up recordings include 1993’s “Hobo-Deluxe; and 1995’s “The Comedown”. He formed a blues jazz trio with Johnny Heartsman and Jimmy Robinson, and on occasion the legendary Jimmy Smith would sit in on organ. In 1997 Early Times was chosen Sacramento’s Best Guitarist winning a Critics’ Choice Award. He toured with vocalist E.C. Scott and plays guitar on her 1998 album “Hard Act to Follow”. In 2001 he helped launch Sirius Satellite Radio and hosted a daily show for seven years. Early Times formed the High Rollers in 2003 and released the album “New York City”; and followed up with 2007’s “Moonshine Serenade”. He reunited with E.C. Scott and again toured with her in 2010 and 2011. In 2016 he was asked to return to SiriusXM and renew his daily show on B.B. King’s Bluesville. His last recording was 2017’s “Hit & Run”.

All songs were written by the street poet Early Times. On “Come On Let’s Ride” Early Times describes the corner “uptown, East side”.  The fabulous title track, “On The Corner”, continues to define the gritty urban landscape of lonely souls, “people running round, trying to get their kicks on the corner”.

Early Times is also a commanding vocalist. He plays an acoustic guitar on “Do What She Do” and sings “here comes Mary in a cha-cha hat, her mama says she’s going straight to hell wearing that, Mary don’t care she don’t worry about that, she’s gonna do what she do, what she do.” “She’s About To Lose Her Mind” features guitarist Popa Chubby with a stinging lead and extended solo.

Early Times is especially rockin’ on the instrumental “Rosie’s Herbs N’ Ting”. A great songwriter, he gets funky on “He’s Got A Jones”, “if you can’t stand the heat, you gotta stay out of the kitchen”. “Say, man” is a jazzier piece, a wonderful interlude, with a hip narrative and some great percussion from Messina.

On “Charlemagne” Early Times sings “well Charlemagne, girl tell me who does your hair, ‘cause it gives you that devil macabre, a certain kind of flair”. Early Times switches back to an acoustic on the folksy “Someone Help Mary’ or she ain’t long for this place”. He closes with the rockin’, Willie Nile styled, “Return of the Queen”.

Often when listening to Bluesville I’ve wondered who is this guy who calls himself “Early Times”? He is a great guitarist, vocalist and storyteller with songs that come to life with characters like Uptown Charlie, Tijuana Madonna, and Cha, Cha Mary.  He has created a film-noir type album that will not be forgotten. A bonafide hit.

Gerald McClendon Let’s Have a Party

Eric Selby Where You Born At