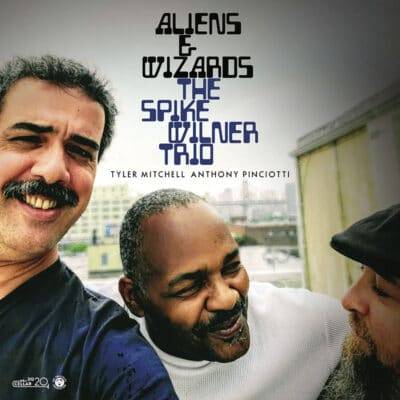 Recorded at the height of the pandemic, Aliens & Wizards features newly composed music by Wilner and a few thoughtful renditions of jazz standards.  This is the follow-up to the trio’s 2017 Cellar Music Group recording Odalisque although this release begins the association between Cory Weeds’ The Cellar Music Group and the SmallsLIVE Foundation. The foundation will carry out its mission to support artists by funding album releases through the Cellar Music Group. The SmallsLIVE Foundation is dedicated to the creation and propagation of jazz music in New York City through recording, live streaming, archiving, educational initiatives and live performances.

As with almost all live music venues, Smalls and Mezzrow were closed to the public in March 2020. Wilner took the opportunity to stay in Pennsylvania for several months with family and, like many musicians during this time, focused on practicing and composition, making productive use of his isolated time. The bristling “Right-O!” begins, a piece composed by the late drummer and friend of Wilner, Johnny Ellis. Right away Wilner’s sparkling piano is front-and-center, a blend of ragtime, bop and contemporary backed by his rhythm mates have worked together in various incarnations since they were quite young. This iteration of the Spike Wilner Trio was first assembled in 2012/2013 and has been a working band ever since, touring Europe and performing regularly throughout New York City.

“Non Troppo” and “Adagio” reveal Wilner’s classical influences, specifically, Bach and Beethoven. “Non Troppo” is inspired by the movement of a Beethoven sonata, and the title refers to the musical tempo marking “allegro ma non troppo” meaning “at a brisk tempo, but not too much!” Similarly, “Adagio” refers to a slow tempo. The intro has Tyler Mitchell’s bowed bass, setting the tone for a heartfelt tribute to Wilner’s wife and daughter. No matter the tempo, Wilner plays smoothly, articulately, as if his fingers just glide over the piano. He clearly has the glissando technique down.

“Mindset” is more explorative, with angular lines and passages that move from contemplative to dense. Mitchell and Wilner stay remarkably tight through the changes. Lush interpretations of standards “Blue Gardenia” and “Stella by Starlight” reflect Wilner’s deep respect for tradition. “Blue Gardenia” features a deeply soulful improvisation by Wilner, while “Stella by Starlight” features fiery turns from both Wilner and bassist Mitchell. The album’s title track “Aliens & Wizards,” like “Mindset” is a free improvisation, demonstrating the versatility and cohesion of the trio. “Prayer for Peace” is gorgeously solemn, delivered in gospel manner that morphs into some blues and ragtime with the emphasis on feeling before we are treated to the multiple clusters of notes that Wilner renders so adeptly in the middle section.  The closer, “Trick Baby” resembles the opener, with Wilner going at a blinding tempo in a combination of ragtime and stride with exchanges with Pinciotti on the eights to cap it off.

In nine selections, Wilner and trio deliver all that could be expected in a piano trio album, bright originals, improvisation, classical pieces, reverent renderings of standards, blues, ragtime, bop and everything in between. Pardon the borrowed term but it is sheer ‘wizardry’ at work.