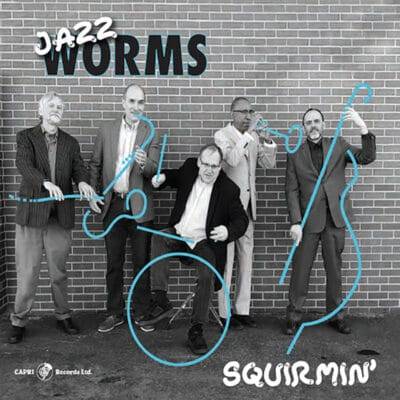 Sometimes it’s difficult to leave a good thing alone, even if it takes thirty years to get back to the moment. That’s the case for the Denver-based jazz quintet Jazz WORMS who reunite after (can we call it) a 30-year hiatus. All five original members come together with pianist Andy Weyl, saxophonist Keith Oxman, drummer Paul Romaine, cornetist Ron Miles and bassist Mark Simon – on an invigorating set of all-new material that resumes without missing a beat and rekindles the chemistry of the quintet.

Formed in 1984, the Jazz WORMS emerged from the thriving Denver jazz scene of the era. The quintet recorded a single album, 1987’s Crawling Out, before going their separate ways. A 2014 reunion concert reignited the spark, providing the impetus for this recording. The long hiatus can be attributed, as you might guess, to the success each as had as a leader or in-demand sideman. Oxman is a mainstay of the Denver scene who has recorded albums with such legends as Charles McPherson, Dave Liebman and Houston Person in addition to being an influential educator at the city’s East High School. Miles debuted as a leader for Blue Note last year with Bill Frisell, Jason Moran, Brian Blade and Thomas Morgan and has recorded on other labels with them and with Joshua Redman. Blues fans will recognize Miles as a frequent sideman of fellow Denverite, bluesman Otis Taylor. Weyl has toured the world with the vocal group Rare Silk and crossed paths with such artists of note as James Moody, Tom Harrell, Benny Golson and Eddie Harris. Romaine and Simon co-founded the Colorado supergroup Convergence.

The name, lest you haven’t figured it out, is an acronym for their respective last names. “We all grew up together,” reflects Oxman. “We were all young guys coming up at the same time who had similar ideas about music and just enjoyed playing together.” After a few years, however, each found himself on a separate path until a 2014 reunion concert at the revered Denver jazz club Dazzle revealed that the old chemistry was intact.

This is also a reprieve for Capri Records founder Thomas Burns, who the ‘80s was himself in a budding career as a label owner, promoter, photographer, writer and entrepreneur. “I really wanted to record their first album, but [vocalist and label owner] James Van Buren beat me to it,” Burns recalls. “The Jazz WORMS had such a different sound for that period of time, when most jazz musicians in Denver were still looking back at the classic jazz of Ben Webster and Coleman Hawkins. To hear a group of young guys at the time just blowin’ their asses off was really exciting.”

That sound still feels vital and current today, (older guys still blowin’ their asses off) as you’ll hear on eight new compositions. Simon’s sizzling “Launching Pad,” lifts us off with he and Romaine laying down a muscular groove punctuated by knife-edged horn lines. Simon also contributed the bouncy “What If All?” which carries graceful melodic flights from Weyl and Miles as well as a riveting solo from the composer. For those not familiar with Miles, he plays a cornet instead of a trumpet. It creates a different sound, and his tone is immaculate. Romaine’s two pieces were inspired by his pet birds – and, in the case of “Wheaty Bowl,” one iconic Bird: Charlie Parker. “Bu’s Box,” meanwhile, reference his bird Bu’s cardboard home, which becomes part of Romaine’s percussive arsenal on the tune itself.

Oxman’s new compositions are both dedications. “Joaquin” is something of a companion piece to an earlier tune, “Elena,” recorded with Charles McPherson. That piece was written for a close friend’s granddaughter; “Joaquin” is for the same friend’s grandson and captures the tenderness associated with a newborn. “The Chimento Files,” which closes the album, is a simmering blues dedicated to one of Oxman’s East High colleagues, Alan Chimento. It features some nice exchanges on the eights from Romaine and Simon. Weyl’s pair of offerings range from the blistering “Lickity-Split” to the wistful, self-explanatory “Balladesque,” which as much as any tune here, reflects the gorgeous, unified ensemble work of Miles and Oxman.  Each makes a tender statement while the composer delivers a restrained but bright solo in contrast to the melancholic horns.

The results of this welcome rebirth exceeded expectations. Burns says “It was magical. I love the way these guys interact. They seem symbiotic: they speak as one, they listen to one another, all the stuff that they teach about jazz musicians – they have it. They always shine as a group.” This is straight-ahead jazz at its finest with the unit working cohesively without any cutting or one trying to upstage another.   Let’s hope we don’t have to wait to long for a return date.