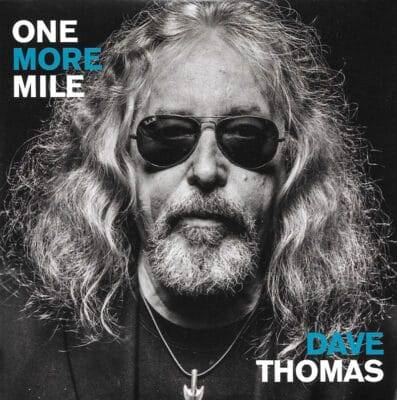 Welsh born Dave Thomas is a veteran of the 60’s British Blues boom. By 1970 he had become the lead singer in the South Wales rock band “Blonde On Blonde”. He spent ten years as leader of the house band for England’s Shake Down Blues Club, which brought black recording artists to the UK. The Chicago styled Thomas has appeared on stage at the Chicago Blues Festival and has even played with Muddy Waters alumni. Today, Thomas is based out of Norwich, England where he has helped to establish the Fine City Blues Club and its festival. Since the Covid-10 pandemic, the club has used live streaming and now has over 17,000 international fans. The lockdown has also given Thomas the time necessary to complete this project.

This album, a decade in the making, was recorded at several different sessions. On the first four tracks Thomas is accompanied by a band including Tom Arnold, Hammond Organ; Dylan Aplvor, bass; and Terry Popple (who previously played with Van Morrison), drums. Also featured are some fabulous arrangements by the horn section of saxophonist Norman Tischler, and trumpeter Jeff Hager. Two classics, “It’s My Own Fault” written by John Lee Hooker, and recorded by B. B. King in 1965; and James Cotton’s “One More Mile To Go” first recorded by Otis Spann in 1969; are featured along with two Thomas originals, the funky “I Like My Chicken Fried” and the soulful “Poor Boy”. Thomas sings with passion, blows some fine harp, and plays guitar in a style strongly influenced by B.B. King. These are great performances.

Three more songs, written by Tony Henderson, were recorded in Ireland by producer and multi-instrumentalist Declan Scott. “I Want The Blues” about the plight of the working man; the poetic “You Danced In My Kitchen”; and the bitter sweet ballad “There’s A Train”. These also feature vocalist Thomas as he accompanies himself on harmonica, while the latter also features Scott on the mandolin.

Three more tracks were recorded in Bristol, England, as Thomas is accompanied by the British blues band “The Groundhogs” led by drummer Ken Pustelnik; these were written by their guitarist Tony McPhee. Included are the environmental anthem “Garden” sung by Thomas in a high tenor; the time shifting psychedelic “Eccentric Man”, and the punk blues rocker “Strange Town”.

This is a wonderful recording from Thomas who possesses a beautiful voice. I look forward to more from him as I understand he has two more albums in the works.