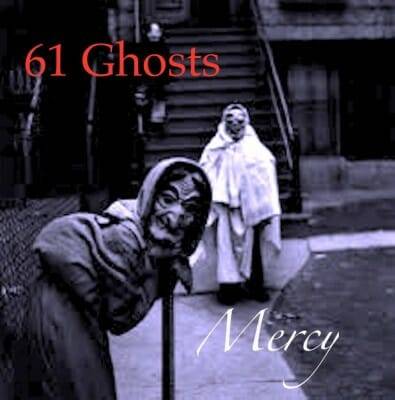 “61 Ghosts” – the name catches your imagination! I mean in the world of blues folklore; ghosts, demons and lonely highways – those are the things that are woven into the stories of blues lore.

The opening track on the album “Black Cadillac” gives you a picture of a couple driving down a highway (maybe highway 61 for all we know?). It’s a song about life and living, and doing both of them to the max. But then the duo that is Joe Mazzari and his partner in crime Dixie Deadwood don’t do anything by halves.

This album is infused with honesty and passion in both the lyrics and music. That is so refreshing, but so rare to find in today’s age of manufactured music. Joe Mazzari is an accomplished songsmith – he knows the importance of the lyrics to a song and also the importance of them being real. In this world of fake news, it’s refreshing to be treated to “real” for a change. Let’s get back to the songs.

“Black Cadillac” is the starter followed by “Shake for Me” which is an equally intense tune. By the 3rd track “Glimpse of You”, we get to see the more romantic side to Joe’s songwriting talent. Also the same is evident on “Dirt on Your Regrets”, “Clarksdale”, “Don’t Fade Away” and “My Thoughts Come Back to You”. Then it’s time to buckle up again, as 61 Ghosts are now out on the open road. The rock n roll engine begins to roar with power and purpose with songs like “Go on Home” and “Don’t Hold Back” – hold on tight!! However, the best is kept for the last two songs on the album.

At this stage Joe has his foot to the floor in the Black Cadillac! “New York Coattails” and “Fayetteville” are two explosive rock n roll torpedoes.

This album takes no prisoners and shows no mercy. It delivers in spades with honest, explosive rock n roll. One of the best indie blues rock albums to be released in 2019!