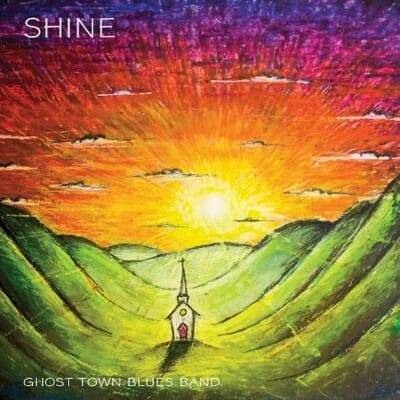 The Ghost Town Blues Band can be compared to Little Feat. While Feat was a hybrid born in a classic rock era with a foundation built around New Orleans, Lowell George, Allen Toussaint, and the blues; the GTBB is anchored in Memphis with bandleader Matt Isbell, the ghost-like shadow of New Orleans and the Toussaint inspired Kevin Houston. Houston possesses over three hundred album credits and on “Shine” he is a band member, Producer, and Engineer.

This is the bands fifth album and fourth studio recording. The seven-piece band is led by Isbell, guitar, cigar box guitar, silverware chest guitar, harmonica, and vocals; Taylor Orr, guitar and vocals; Houston, sax and vocals; Suavo Jones, trombone, trumpet, and vocals; Matt Karner, bass and vocals; and their two newest members Cedric Taylor, keyboards and vocals; and Andrew McNeill, drums and vocals. All of the songs are written by Isbell and Orr.

“Shine” follows on the heels of the GTBB’s 2018 live album “Backstage Pass”. On that last album they proved why they are one of the best live bands as they weaved their originals with covers featuring Isbell’s cigar box licks and Dr. John type vocals. Reprised from that live session is the title track now featuring the backing vocals of newlyweds Paul DesLauriers and Annika Chambers, with the lyric “my mind is a fascinating vehicle”. Also re-visited is “Givin’ It All Away”, a new studio version featuring Taylor’s piano intro and the horn section of Jones and Houston.

Other favorites include the sexy “Soda Pop”; “Lyin’ To Yourself” with a Feat-like intro “Molina, have you seen her?”; Taylor switchin’ to the B-3 on “High Again”; the funky “My Father’s Son”; the New Orleans inspired “Evangeline”, and “Hey There Lucinda” featuring violinist Ilana Katz Katz.

The contemporary GTBB is breaking down the barriers that separate genre’s and creating their own recipe for the blues.