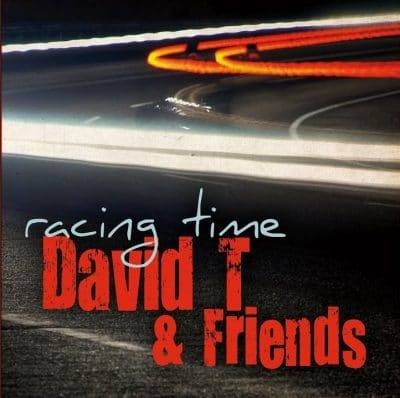 Racing Time is a re-release of the third album by David T and Friends. It is the work of a large and exuberant group, consisting of twelve core members and various guests. Together they celebrate the original music of David Tannenbaum, who plays guitar and sax, writes, arranges and produces This album illustrates the variety and ingenuity of this man’s music and the friends he has chosen to join him

Tommy Lewis the principal lead singer of the group, but for this album, there are seven lead singers for 13 songs. Instruments range from guitars and harmonica to the entire horn section, plus cello and flute. Genres range from folk to rock to funk and blues. David T names The Beatles, James Brown and Jimi Hendrix as influences, and you can hear them all here, plus a large dose of British Invasion, some country, and some 70’s pop. It is, in fact, a musical variety show of an album.

Racing Time opens with the fast-moving, 60’s sound of “No Longer Chained.” “Think Twice” then moves unto a blues-rock groove, and is followed by the harder blues of “Better Days,” a song that grabs your ears and won’t let go! The weet “Jenny” then leads into the exciting wall of sound that is the instrumental “New Year’s Day” with its exuberant horns and stellar work from everyone

The album then continues to surprise and delight, dealing in various ways with human experiences and emotions It also has humorous moments. I love the sweet silliness of “Calendar Girl” but my personal favorite song on the album deals with a truly Southern experience in the hilarious “Waffle House Redux.”IIf you are from the South, it may make you hungry for hash browns!

There will be plenty of music here to suit everyone’s taste! Grab this album in your preferred format, put your dancing shoes on, and get ready to be entertained!