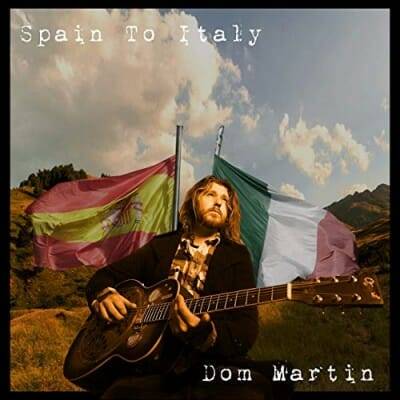 Where do I start as it’s all been said before about this young man from Belfast, Northern Ireland. The right place at the right time springs to mind. My first time to meet Dom was on the 7th of March this year at renowned rock venue Whelan’s in Dublin. Dom was playing support to Elles Bailey and what a talented artist she is too.

From the opening chords on his guitar until the last resonance of his amazing voice had disappeared, I was hooked. It was one of the most profound experiences of my life. Over the years it’s no lie to say I’ve seen and heard thousands of bands. Some of the most wonderful moments in my life have involved music.

The likes of Dom’s talent only comes around once in a lifetime. That’s why this young man’s potential is simply unlimited. To the songs….

The title track of the album, one which has a personal connection for Dom as he wrote it with his father in mind. Really powerful lyrics and vocals charged with emotion – a beautiful song.

The hypnotic “When the Rain Came” is easily one of my favourite Dom Martin songs. Then “Easy Way Out” – this proves once again what a master storyteller Dom Martin can be. The lyrics are so descriptive, you feel as if you are part of his story. Some of the most renowned songwriters are also excellent story tellers.

Which takes us to “Antrim Blues”. This is when you hear Dom in full electric mode. Though Dom is a dab hand at acoustic, when he goes full electric his awesome playing skills are evident for all to hear and see.

Musically Dom would admire many artists.

Top of that list would be Rory Gallagher, so that being the case it was inevitable the Rory influence would come to the fore at some point on Spain to Italy and “Western Plain” is a prime example of that. Not a Rory original but nevertheless very closely connected to the man from Ballyshannon. It’s not an exaggeration to say Dom’s version sits very well alongside the G man’s version. Also worth noting that you won’t find “Western Plain“ on the streaming platforms. You will however find it on a CD version which you can order online or if you are attending one of his phenomenal gigs.

The thing is Dom is not a Rory Gallagher or a Garry Moore. He is unique, that’s what makes him so special. In my opinion he transcends genres. “Spain to Italy” marks the first step in what promises to be a dazzling career for this very humble young man from Belfast city.

In a recent interview Dom was asked what did he want to get out his career in music? The rock n’ roll answer would have been to become a millionaire, to own large houses and fast cars. Dom’s answer said it all about the kind of person he is. He replied I just want to be able to support my wife and family. Judging by the huge response and the rapid rise of this young man in the world of music, supporting his family will be a given.

2019 is almost over and it’s been a trailblazer for Dom. With 2020 just around the corner Dom Martin’s career is about to go stratospheric. It couldn’t happen to a more deserving person.

Carla Olson Have Harmony Will Travel 2